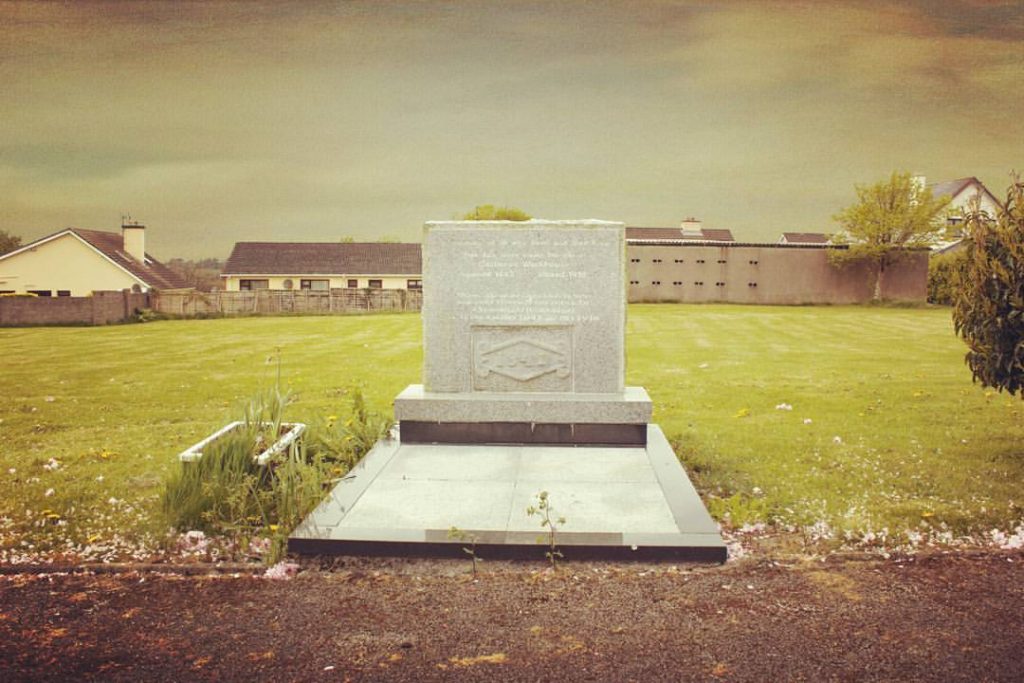 The stone dated 1841 comes from the original workhouse structure that was built around this time on a six acre site south of Castlerea town. Constructed using the design laid down by Poor Law Commissioner architect George Wilkinson it was one that was repeated to a great extent across the country as places to house the growing destitute Irish. Long thought lost to history the stone was located in recent times and enclosed by a local mason into a standing stone structure on the site of Bully’s Acre in Knockroe. (This term has been used regularly to describe famine or workhouse mass graves with the origin possibly stemming from the Irish word “buile” which can be used to describe someone who is insane)
Initially built to accommodate 1000 paupers the Union Workhouse was completed in 1842 but long running financial issues meant it would be four years until it was finally used to receive the poverty stricken. Running costs for the complex were dependant on the collection of Poor Rates from local landholders but as the famine gripped the country they were less inclined to pay causing lengthy delays and postponements. Furthermore the original cost of rates were set before the famine years and were later seen to be inadequate especially as inmate numbers exceeded capacity.
It was into this environment that the workhouse finally opened it’s doors to the starving masses waiting outside. Quickly the numbers became unbearable with the paupers huddled together in dormitories that became a breeding ground for disease, hunger and death.
Once inside inmates were separated from their families, often not seeing them again, with those that were capable being given menial manual jobs for the sustenance that they would receive. Men were tasked with breaking stones in the workhouse yard which were to be used as gravel for the many pointless famine roads being built while woman regularly worked at domestic duties and caring for the sick indoors. Even the older inmates were put to work with many mending clothes, spinning wool or picking oakum.
The work available however could never cope with the sheer numbers of destitute hungry and for many who entered the workhouse in Castlerea they would not leave alive.
Reports from the period describe in harrowing detail how when a person was near to death they were moved to an area at the rear of the building called the black room. Here they were allowed to die before their corpse was lowered from the window into a vast pit where it was covered with lime.
Details of the exact number of deaths at the workhouse and subsequent burials in Bully’s Acre are unclear but considering that Castlerea and Roscommon as a whole suffered such widespread losses during the famine years the figure is undoubtedly high.
During the Great Famine the population of Roscommon was particularly badly impacted with a population loss of 31% making it the worst hit county in the country