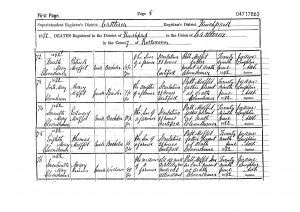 Before the advent of antibiotics and hygienic practices in the home a serious concern existed for parents of young children who were especially susceptible to infectious diseases common in the Victorian era. Across major European cities poor sanitation and overcrowding meant illnesses like typhus, cholera, influenza and smallpox were greatly feared and in many cases reached epidemic proportions. In 1846 Ireland, as the Great Famine tightened its grip on the country, many sought refuge in places like Glasgow and Liverpool bringing with them a form of typhus, known as ‘The Irish Typhus’ thus adding to problems already facing the city dwellers. By 1847 a new virulent form of this had enveloped the British Isles killing 30,000 in that year alone.

Back in Ireland meanwhile concerns for another infectious disease, Scarlet Fever, was making people anxious. Also known as Scarlatina, this is an illness caused by the Streptococci bacteria which causes sore throat, high temperature and swollen glands but was known to have more serious consequences in the past. Delays in diagnosing the Fever, and lax treatment in the early stages often resulted in a rapid spread of the infection and children caught up in the 19th century epidemics were seen to succumb to it within 48 hours.

Historically, it is known that many infections came from ingesting unpasteurised milk that had been handled by an infected carrier, but more commonly the disease was contacted within the family home from a loved one. Small cramped living quarters allowed the bacterial infection to spread through human contact while it also became airborne through coughing and sneezing, all which unfortunately passed the disease from one child to another. The fatal consequences were that whole families were wiped out within a matter of weeks where had the original patient been isolated, containment of the disease would have prevented extended losses.

Initially presenting as a sore throat with fever and ‘strawberry tongue’ where the tongue appeared coated in a white film, the infection progressed rapidly. A rash covered the body and the glands became swollen along with the tongue which caused breathing difficulties. Severe headaches, nausea and abdominal pain were also common but for the many who were unable to fight off the contagion death swiftly followed.

Even those lucky enough to survive were often left with debilitating long term effects including liver and kidney damage, meningitis, rheumatic fever, and pneumonia as their damaged immune system proved unable to fight off a secondary infection.

Present-day antibiotics, such as penicillin, have reduced the harmful effects of this ailment but as recently as the late 1880’s it was the most common infectious diseases causing death among children in Europe. Some regions recording deaths attributed to the disease exceed 30% fatalities surpassing even that of measles, whooping cough and diphtheria.

In 1892 the Fever visited the family of Moffit of Cloonsheevers, between the towns of Castlerea and Frenchpark, and the result was devastating. In early May the youngest child, Patrick, had contracted the infection and was already displaying concerning symptoms. By the 4th of the month he had died aged just 4½. Two days later his older sister passed away aged 7½ followed the next day by her older brother Edward who died from the disease aged 12½. The following day their brother Thomas died of the infection at 14 years of age and became the last child to die from the disease in the house leaving behind just one brother, John Moffit. He would have been about 10 years old at the time. Sadly within two weeks there was another loss in the house, with the children’s maternal grandmother Mary Quinn passing away of old age debilities while staying at the family home. It is probable that the bacterial infection that was present in the building, though not listed as a causal factor in her death, hastened her passing or perhaps watching four of her grandchildren die within a matter of days was simply too much for her to bear.

On the 29 June the children’s father Patt Moffit travelled the short distance to Frenchpark and registered all of the deaths that had taken place the previous month in his house, including his four young children and his mother-in-law. The location of the resting places of the departed children is unknown but a family plot is present at Fairymount and is the closest cemetery to Cloonsheevers townland.