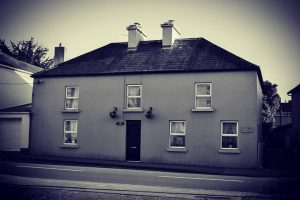 Born in Castlerea in 1815 to Dr Thomas Wilde, an eminent provincial physician, William was educated at Elphin before entering the profession like his father. His career that followed was remarkable as he became the leading eye and ear surgeon in Europe revolutionising the practice of treating infections in particular. His first clinic in Dublin treated the blind poor for free and he also taught aural surgery techniques in probably the most respected teaching hospital in the country.
In addition to his surgical work Wilde was hugely involved with the mid-19th century census returns being tasked with analysing mortality rates at the time of the Great Famine in Ireland. For this pioneering work he received a knighthood in 1864.
Wilde was an accomplished contributor to medical journals throughout his life but he also wrote papers of historical and archaeological significance and published articles relating to folklore and legends.
For all that is praiseworthy about the man and his career though some aspects of his life were of a less laudable nature. His reputation was severely tarnished late on in his career when a long-term patient, and apparent mistress, brought a libel case against his wife alleging that Wilde had raped her in previous years. Wilde’s previous infidelities were no secret – even before his marriage, which produced Oscar, he had fathered one son, who Wilde trained as a doctor, and two daughters who tragically died. This case however was different and Victorian Dublin was shocked as sordid details of the proceedings unfolded especially when costs were awarded against the Wilde’s.
After the court case, and the ill feeling that it caused, William became reclusive retreating back to the west of the country and his beloved ‘Moytura’ overlooking River Corrib. In 1876, just as his son Oscar was beginning his literary life, Sir William Wilde passed away. He was buried in St Jerome’s cemetery in Dublin.