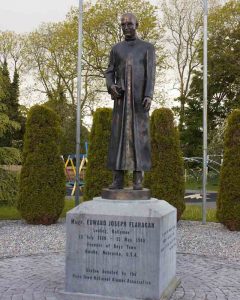 Edward was born at Leabeg, outside Ballymoe, in 1886 to John and Honoria Flanagan, a couple of modest farmers with strong Catholic faith. His formative education was at the local Drimatemple national school before moving on to Summerhill College in Sligo where the Catholic teachings and ideology had a lasting impression on him. Upon leaving school and with a desire to enter the priesthood he made the decision to emigrate to America and to carry on his religious studies there. At the ave of 18 he arrived into New York where his education resumed before continuing in Italy and eventually Austria where he was ordained in 1912.
Returning home to the States he soon found himself serving in the parish of Omaha in Nebraska, where he was appalled by the destitution suffered by local young boys and felt he could help. In 1917 he founded his children home, on the outskirts of the town, where the care focused on treating the delinquencies of the boys with compassion instead of the usual prescribed corporal punishments. Through the work of the home young former at-risk boys who previously were inevitably caught in the loop of crime found they had a purpose in society. These revolutionary concepts were derided even by his superiors, but Fr Flanagan persevered with his ideals advocating a system of social preparation where the boys were taught to become responsible adults in addition to being given a trade.
Under his stewardship Boys Town, as it was soon named, grew steadily over the years to include all of the usual businesses and facilities that would be found in any town in America at the time. So much so that Boys Town was officially recognised as a village of the state of Nebraska in 1936
The innovative work of Fr Flanagan didn’t go unnoticed and in 1938 his life was celebrated in the Academy winning film ‘Boys Town’ starring Spencer Tracey with the script given the approval of Flanagan himself. Away from the silver screen his advice was sought for the foundation of many schemes similar to his across the globe and it was while attending one such event in Berlin that he died in 1948. He was returned to America and buried in his beloved Boys Town.
2001 saw a statue unveiled in Ballymoe commemorating Fr Flanagan and his achievements with an exact replica being placed in Boys Town, Nebraska a symbol of the two towns united in acclaiming their famous son.